For some areas which are far from city or commercial concrete batching plant, or for some islands, many clients want to produce the concrete by themselves. For these areas, most of the situation, there is no power supply at site. A diesel engine driven mixer is widely used by the clients. Hereby, we recommend you our JZR series diesel concrete mixer and HMC series self-loading concrete mixer. 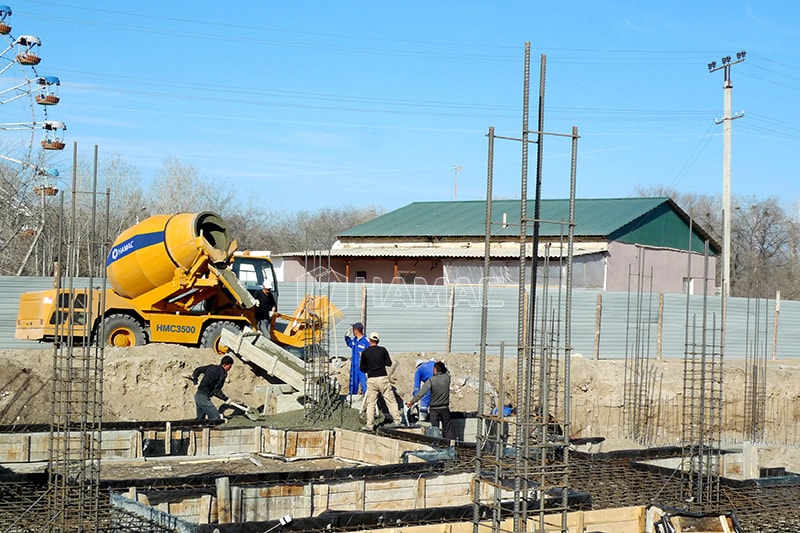 Regarding the JZR series diesel concrete mixer, it is for some small projects. We have two models JZR350 and JZR500 with different capacities 0.35m3 and 0.5m3 per batch. There is water tank is equipped, so the water quantity can be controlled exactly. It is easily to be moved in different working sites because it is equipped with wheels. This machine can work together with the concrete pump at site, then the concrete will be pumped to the site or building directly. It improves the efficiency under this working mode. 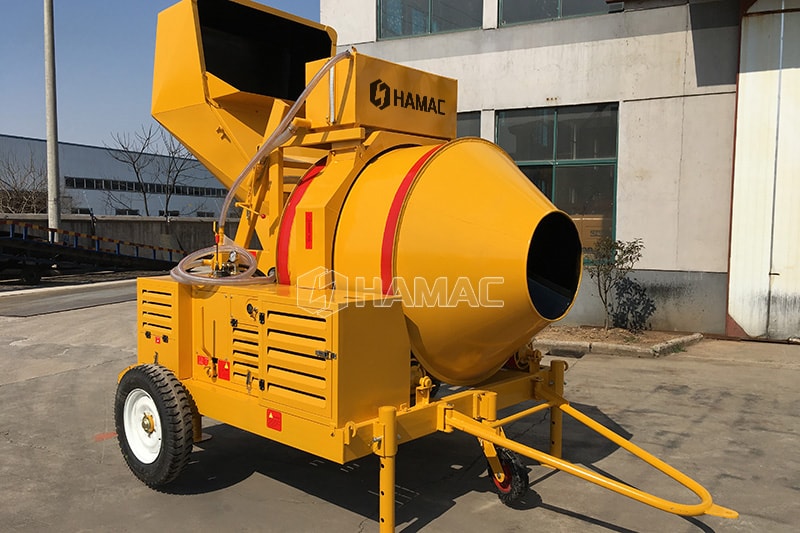 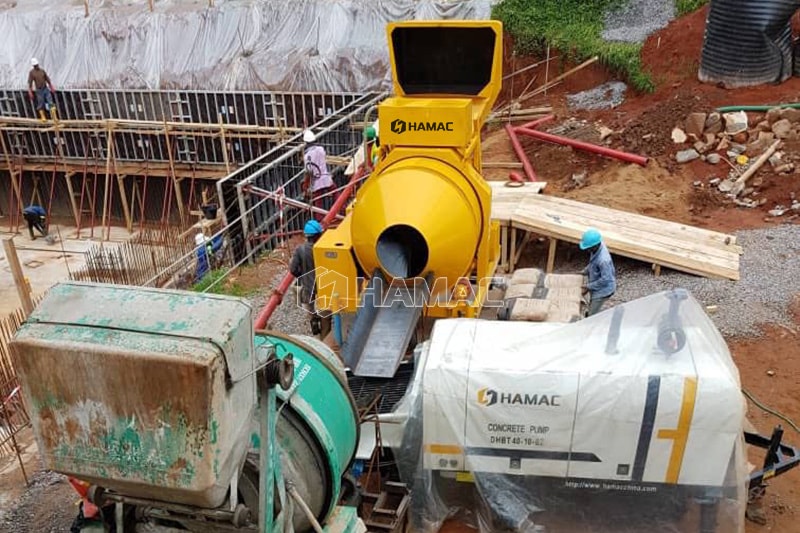 Regarding the self-loading concrete mixer, we call it OFF-ROAD MOBILE BATCHING PLANT as well. It is the ideal solution for producing high-quality concrete with low costs at sites.

It is equipped with load cell to control the weight of aggregate, sand and cement; and the time relay can control the water flow, so the concrete is produced precisely. 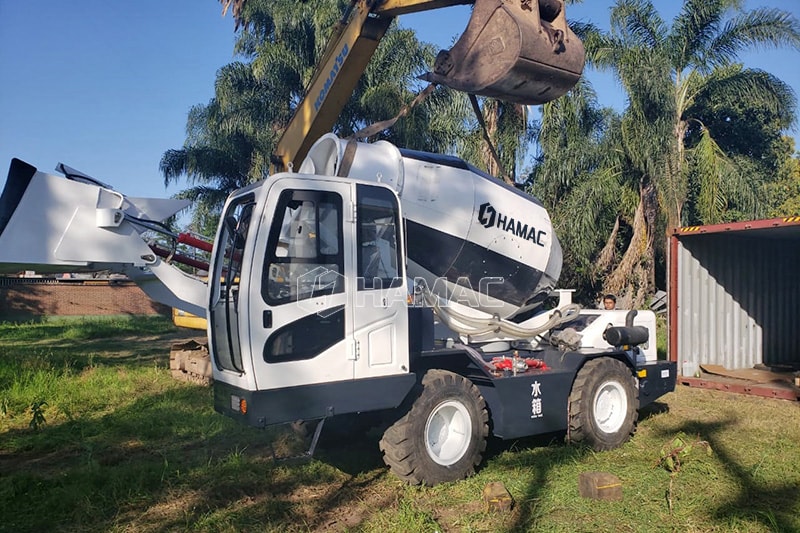 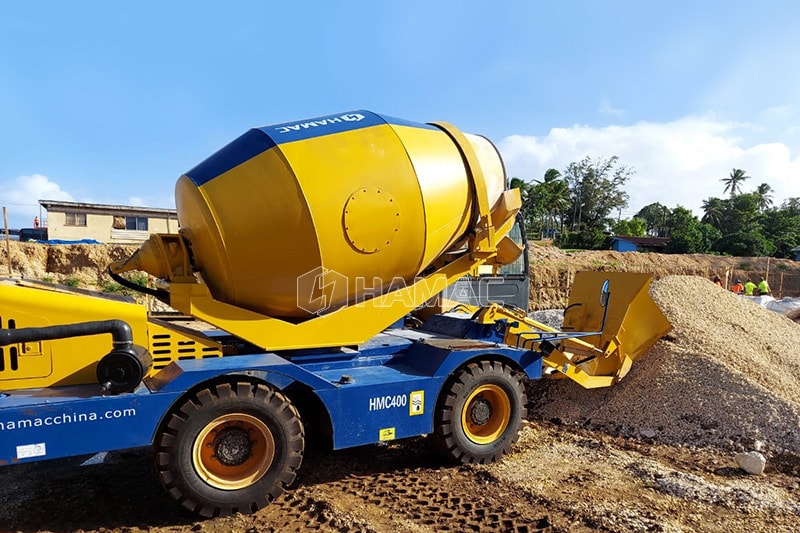 Loading: Because of the specially designed hinge type hydraulic bucket, this mixer can load the material easily and accurately. There is a blade in the shovel so that the cement bag can be cut automatically to avoid the waste of cement. All the ingredient can be fed into the mixing barrel from the top of shovel;
Mixing : After the aggregate and cement are fed into the mixing barrel, they will be mixed with the pressed water from the double water tanks which are on the truck. The specially designed double screw to confirm the quality of concrete;
Transport: This mixer is fit for any working site because of its 4 wheels hydraulic driven system and favorable configuration. It can crawl on the 30 degrees slope at a full load situation;
Pouring: Adopt the revolutionary solution. The operator can control the mixing barrel at a 270 degrees rotation so that it can discharge the concrete at 2 meters height, 4 directions.
Operation: There is a well appointed cab. The driver can operate almost all the actions through a handle shank.
Safety: This mixer equipped with ROPS-FOPS system to provide the driver with comprehensive safeguard. 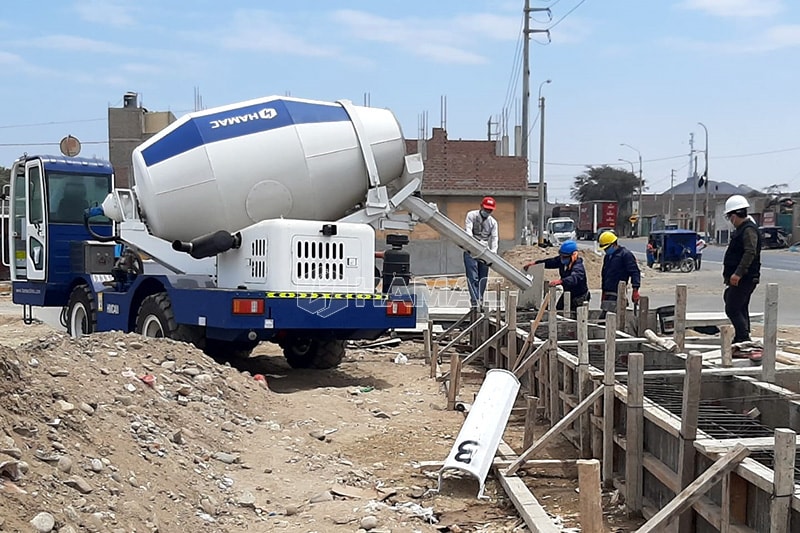 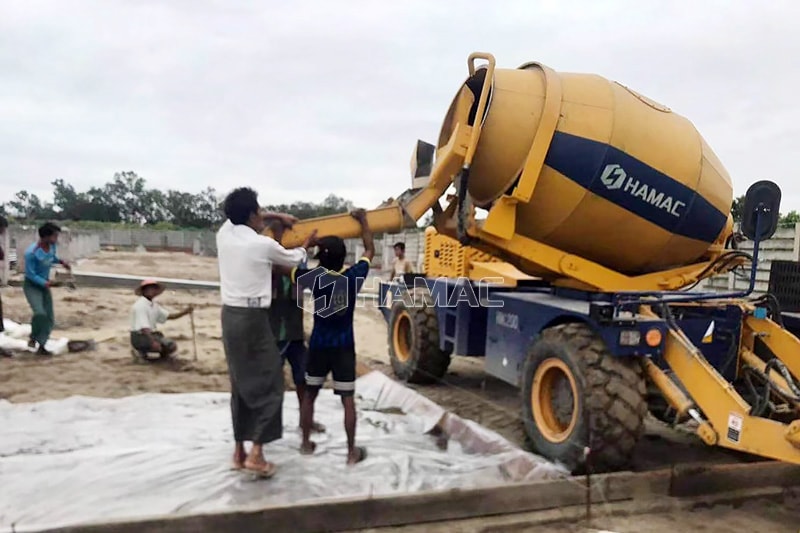 Up to now, we already exported this kind of mobile concrete mixer to different countries all over the world. They are used in different working sites for different projects. 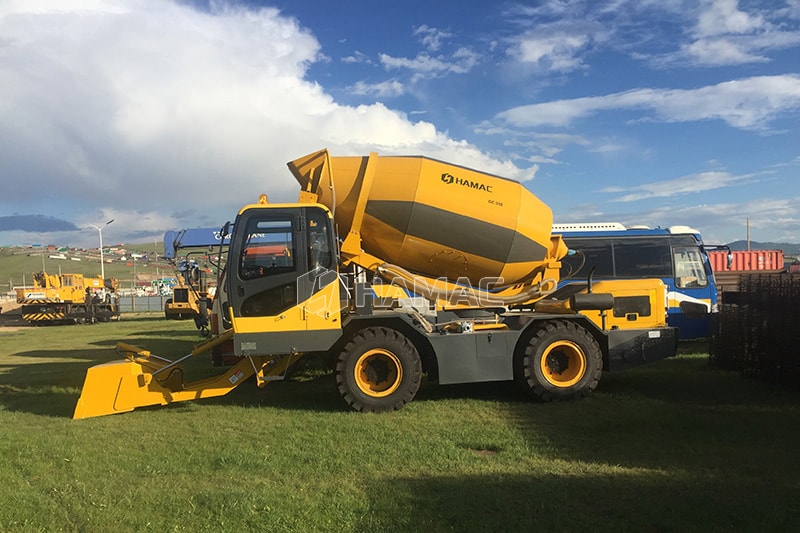 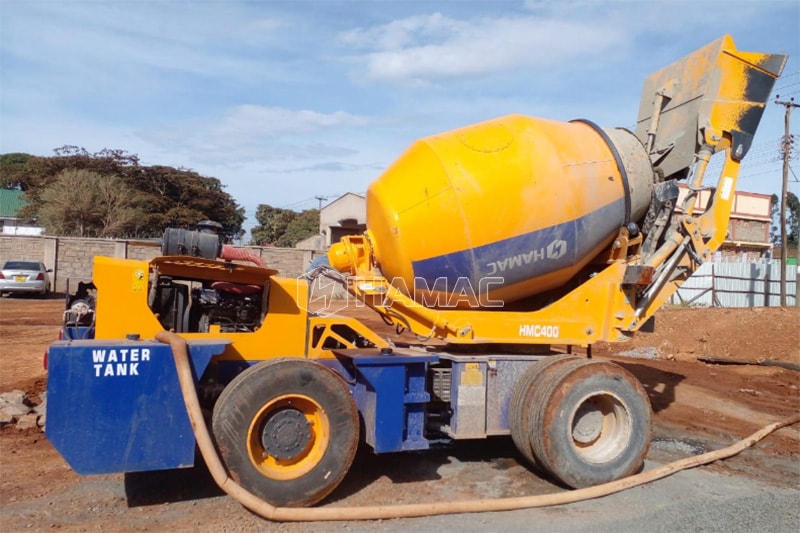 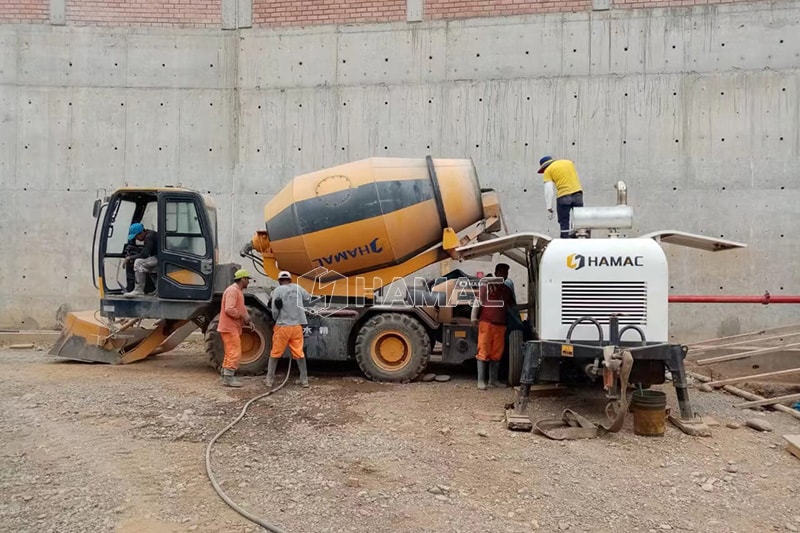 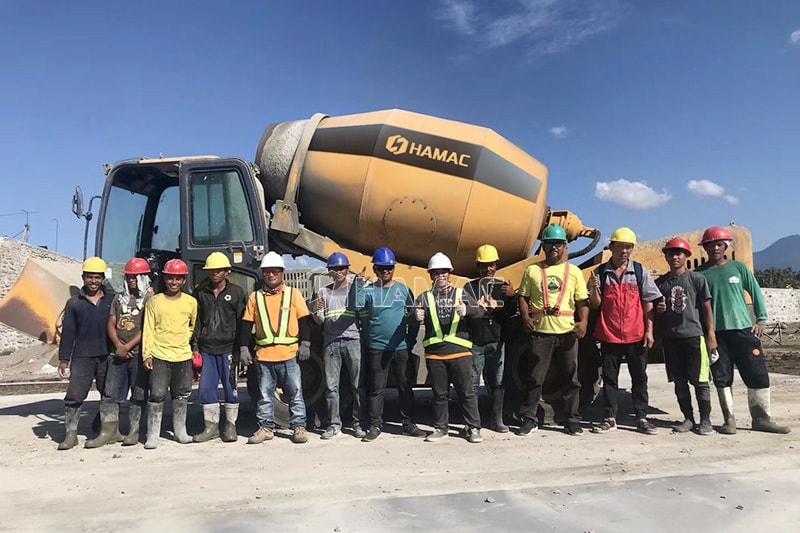 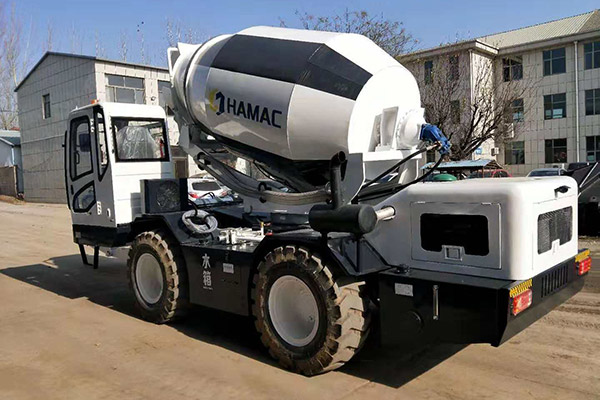 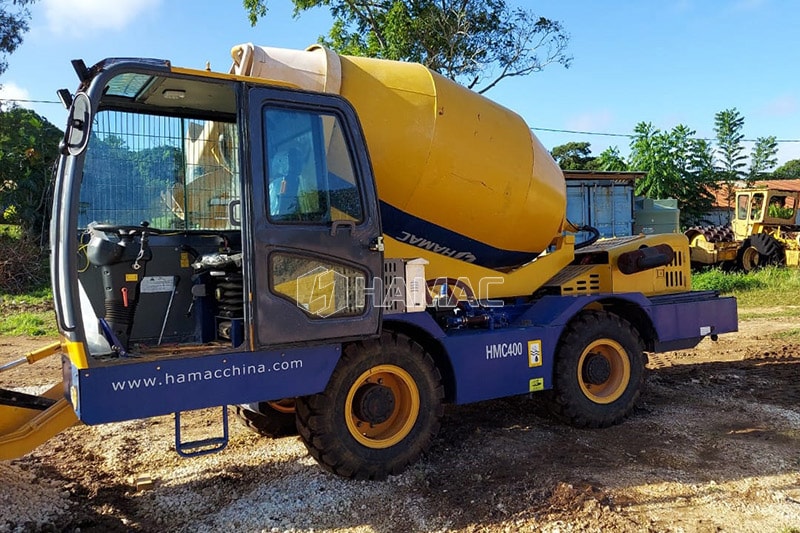 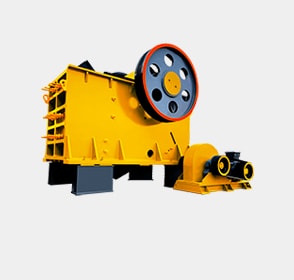 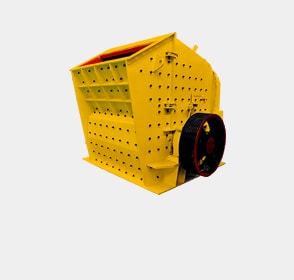 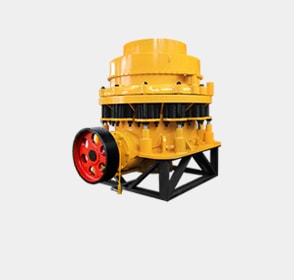 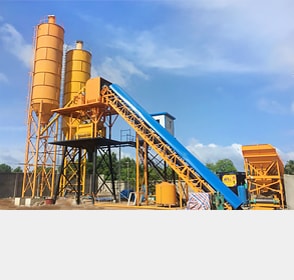 Integrating R&D, production, distribution, and service-providing into one enterprise, HAMAC attaches great importance to communication with customers. We have established an after sales visit team consisting of more than 56 persons. On the one hand, they timely solve the problems that our customers encounter; on the other hand, they collect feedback and improvement recommendations from our customers, to correctly orient our development and research. 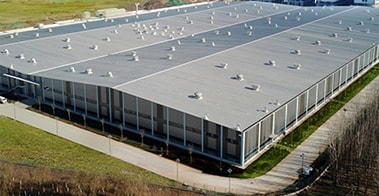 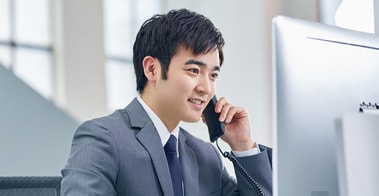 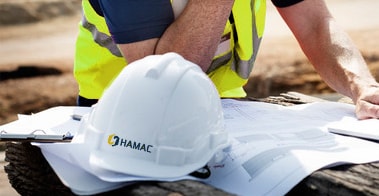